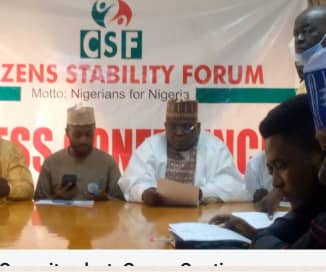 A Civil Society Organization under the aegis of Citizens Stability Forum (CSF) has berated the United States of America (USA), United Kingdom (UK) and the Canadian over their recent  public terror alerts that the trio raised that went viral.

The group questioned the motive behind the three countries going public instead of notifying the Nigerian government, establishing that Nigeria as a country have been enjoying long diplomatic relationship with them.

In a press conference to journalists in Kano state, the group frowned that it is expected that when a foreign mission like the US is faced with such intelligence to channel such warnings and intelligence through diplomatic channels where adequate plans and provisions will be made to not only avert the situations but to also apprehend the planners and sponsors of such act.

The group lamented that such warnings from from the trio of the US,UK and Canadian embassies had endeared Denmark and Australia to follow suit, the warnings it said had plunged the entire Nigerian capital into perpetual fairs where businesses and schools have started closing down because of the fairs of terror attacks.

“The recent happenings surrounding the terror alert raised by the United States, the United Kingdom and Canadian embassies in Nigeria have left a bad taste on the side of Nigerians, putting into question the sort of diplomatic relationship vis-à-vis rules of diplomacy that currently exist between the said countries and Nigeria.

“It is thus very unfortunate that the US went public with intelligence type of warning without sharing any solid or useful information with the Nigerian government, thus deliberately creating widespread speculation and panic and creating undue anxiety among Nigerians.

The group also noted that no countries in the world is impeccable of one security challenge or the other, adding that the US has the peculiarities of gun violence and mass shooting, that many school children usually victims of.

It said that there is a report that the security challenge of gun shooting have put many children and teens into serious mental health crisis, steadily eroding their sense of wellbeing and safety.

” Every country around the world has its own security challenges, which of course can be in different forms. The US for example has serious challenges of gun violence and mass shooting which is epidemic that school children are not spared. It has been reported that the security challenge due to gun violence and shootings have put many children and teens into serious mental health crisis, steadily eroding their sense of wellbeing, safety and efficacy known to be essential for development. According to published statistics from the Centre for Disease Control and Prevention (CDC)there was 19,384 deaths in 2020 due to gun violence and mass shooting “.

Echoing the sentiments of the group is its lead convener, Muktar Lawal who also expressed his displeasure over the public security alerts by the US,UK and Canadian embassies.

He noted that the issuance of the security alerts has endeared a lot of trepidations, fears and anxieties amongst the Nigerians living in the federal capital territory.

He wondered why these country had refused to relay such intelligence to the Nigerian government since there are favourable diplomatic ties amongst the country.

” The reason why we convene this press conference is for them to understand that issues like this, issues of security are very important and critical.

“They should channel it to the appropriate unit of the Federal Republic of Nigeria instead of going public and viral, and by doing this our security agencies will rise to the occasion and do the needful”, Muktar said.