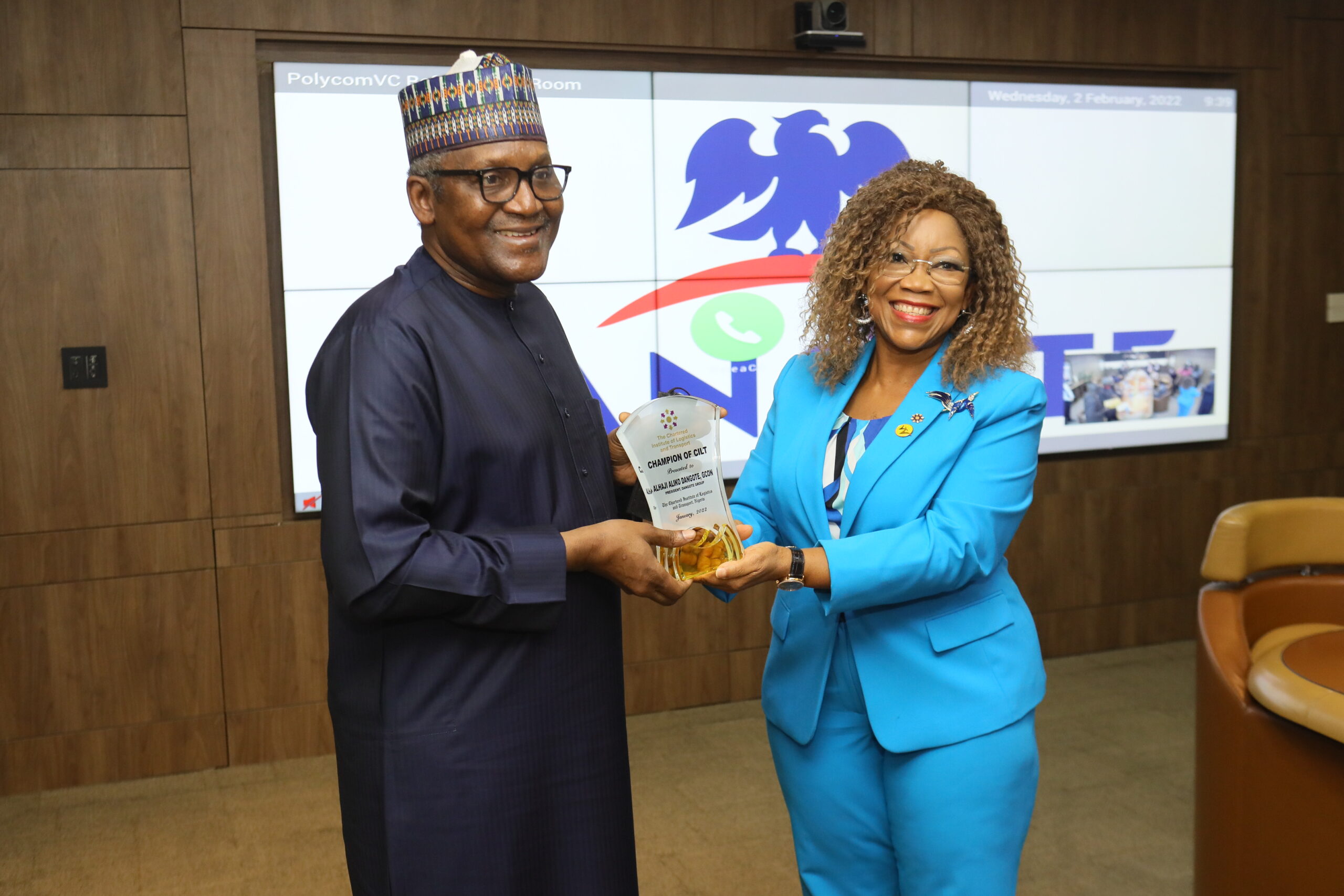 L-R: President Dangote Industries Limited (DIL), Aliko Dangote, receiving the prestigious award of the ‘Champion of CILT’ from the National President of the Chartered Institute of Logistics and Transport (CILT), Mfon Usoro, (FCILT), in his Ikoyi office on Wednesday

President/CE, Dangote Industries Limited and Africa’s wealthiest man, Aliko Dangote yesterday received the prestigious award of the ‘Champion of CILT’ in recognition of his personal and the group’s contributions and support in areas of transport, logistics and supply chain management in Nigeria and Africa.

While accepting the award, Dangote, who commended the efforts of the Institute’s top officials to improve the transport sector in Nigeria, also pledged to collaborate with the CILT in the areas of training and capacity building on transport, logistics and supply chain management issues.

Usoro, who presented the award to Dangote, said the delegation came to inform him about the change in baton in the Institute, and to renew the relationship between the CILT and corporate members. She noted the long relationship with the Dangote Group, which presently has 5 Fellows of the Institute; 5 Chartered members, 18 Members, and 47 affiliate Members of the CILT. The team also expressed condolence over the recent demise of the Group Vice President, Alhaji Sani Dangote.

Immediate past president of the CILT, Mr. Jibril, in a vote of thanks, commended Dangote for the good work being done by the group in creating wealth not only in Nigeria but in Africa. He also hailed the group for building capacity in logistics, transport and supply chain management in Nigeria.

According to him, “I have been with CILT Council for over one and a half decades and through this period I have come to realise the great work the President of the Dangote Group is doing and his supporting staff in the area of  development of capacity and skills acquisition in the logistics, transport and supply chain industry and this has gone a long way in professionalising the industry and has gone a long way in creating wealth and generating employment not only in Nigeria but the African region.

President Buhari Calls For Adoption Of Gas As Transitional Fuel